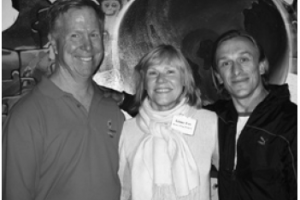 On May 1st filmmaker Jeremy Gilley came to Community Prep to share his Peace One Day program. In 1999 Jeremy Gilley decided to try to establish the first-ever Day of Peace with a fixed calendar date. In September 2001 the Member States of the United Nations unanimously adopted the first-ever annual day of global ceasefire and non-violence – Peace Day, the 21st of September.

Peace One Day now works to create global awareness of the day and manifest life-saving activity and individual action throughout the world every September 21.

They are working towards an annual day of global unity; a day of intercultural cooperation on a scale that humanity has never known. The next stepping stone on this journey is to reach 3 billion people with the message of Peace Day by 2012, and they are working with governments, the UN system, non-governmental organizations, schools and corporations to achieve that.

The film has been so successful that it has inspired others like Lenny Kravitz, Alanis Morisette, Duffy, and Paul McCartney to make their own films as part of the “My Take On Peace” project.

Mr. Gilley’s visit was described by those who attended as “life changing” and “incredibly inspiring.” He spoke of how one person can make a difference.

“Peace One Day merges perfectly with our mission at Community Prep,” explains founding head of school Dan Corley. “When we started the school twenty-five years ago, our goal was to give lowincome students not only the tools to succeed in college-prep high schools, but also the grounding to become community leaders.”

“I really liked what he had to say,” said an 8th grader after the presentation. “It is cool to know there are ways that I can help spread peace in the world.”